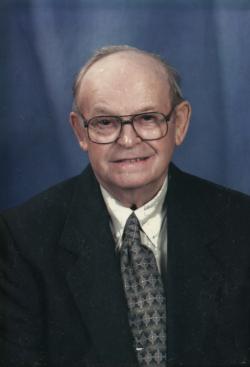 It is with deep sadness that we announce the passing of Donald Edward MacLaughlin at the DECH on November 20, 2019.  He was born January 30th, 1929 in Acton NB. The son of the late Eden and Bessie (Dykeman) MacLaughlin, he was the last surviving member of his immediate family.

Don will be greatly missed by his wife Barbara (Williams) of 51 years.  He is survived by nieces Coreen White and Sharon Cogswell and her family, also by brother-in-law David Williams of Harvey, sisters-in-law Edna Dewer of Saint John, Bessie Messer (Vaughan) of Fredericton and Donna Williams of Harvey as well as several nieces and nephews.

Besides his parents, he was predeceased by his brothers Russell (Late Ada), Stanley (Late Jean), nephew Ivan MacLaughlin also by several brothers-in-law and sisters-in-law.

Don was a farmer, gardener, woods worker and carpenter.  He spent many hours in his workshop making lawn chairs, lighthouses, windmills and a water wheel for his pond, on which he built a bridge across.  He was most proud of the baby sleigh and rocking chair that he built.

At his request, there will be no visitation or funeral service.  Burial will take place at a later date in the Acton Cemetery.

For those who wish to make donations in memory of Don, we suggest the Sheryl Williams Scholarship Fund at Harvey High School or to a charity of your choice.

Bishop’s Funeral Home has been entrusted with the arrangements.  Online condolences and sharing of memories may be expressed through www.bishopsfuneralhome.com