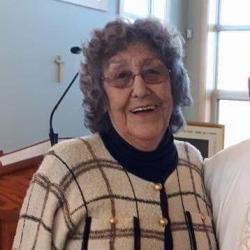 The passing of Loretta Yvonne Sabattis of Kingsclear First Nation occurred on Tuesday, October 22nd, 2019 at the Doctor Everett Chalmers Regional Hospital. She was 80 years old, born in Oromocto First Nation, NB. She was a daughter of the late John and Mary (Polchies) Sabattis.

Loretta had a heart of gold when it came to her family, friends and community.  She would always be your biggest cheerleader at any sporting event when her children, grandchildren and even her great-grandchildren were participating in.  When she was not spectating events, you would find her knitting, playing bingo with her partner in crime, or spending the evenings and weekends in Monticello Maine,

Besides her parents, Loretta was predeceased by five brothers; Ambrose, Royden, John, Maynard and Wilfred as well as four sisters Annie, Mary, Jean and June; along with three of her grandchildren, Kevin, Joshua, Adrian.

Loretta will be resting in her home at 324 Hill Street, Kingsclear First Nation, beginning Thursday afternoon and all-day Friday. A mass of Christian Burial will take place on Saturday, October 26, 2019 at 11AM at St. Anne's Roman Catholic Church in Kingsclear with Father Monte Peters Officiating.  Interment will follow in the adjoining Cemetery.

Pallbearers for the service will be Mitchell, Nigel, Connor Sabattis, Ethan Webb, Matthew Tomer, Nick Sacobie, Shawn Narvey and Gabriel Atwin. For those who wish, donations in Loretta's memory can be made to the NB Lung Association.

Bishops Funeral Home 540 Woodstock Road has been entrusted with the arrangements. Online condolences and the sharing of memories may express through www.bishopsfuneralhome.com