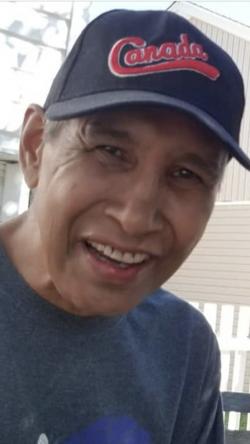 The family of Peter Wayne Bear of St. Mary’s First Nation, are sad to announce his passing on September 24, 2019 at the Dr. Everett Chalmers Hospital. Born in Fredericton on March 2, 1958, Peter was the son of the late Albert and Rebecca (Paul) Bear.

Peter is survived by his brothers, Martin (Susan) Bear, Ned Bear, Jonas Nash (Lisa); sisters, Debra (Wayne) McKay, Leanne Bear Froese and Edna Paul. He will also be missed by his many aunts, uncles, nieces, nephews and many cousins which are scattered throughout St. Mary’s First Nation and Moskody First Nation.

In addition to his parents, Peter is predeceased by his sisters Rosemary Stoneham, Jane Bear; brothers, Arthur and Terry Bear.

Peter was known as a very basic independent person with a great sense of humor. He loved waking up in the morning and listening to the radio, he enjoyed fishing, fiddleheading and long drives with his nephews Bill and Ernie.

The family would like to say a special thank you to Peter's nephew, Bill Nash, his home care worker Tina Thompson and the staff at the ICU unit at the Dr. Everett Chalmers Hospital for your wonderful care. Also thank you to his best friend Arnold Brooks for always being there.

Bishops Funeral Home, 540 Woodstock Road, have been entrusted with Peter’s arrangements. The family have suggested that memorial donations in his memory may be made to the Fredericton Homeless Shelter. Online condolences and sharing of memories may be made at www.bishopsfuneralhome.com.