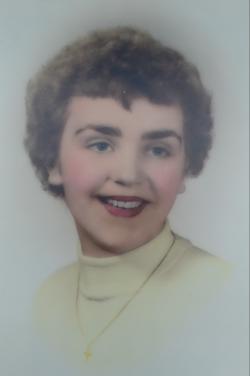 Born into this world on July 26, 1936 at St. Stephen, Charlotte County New Brunswick, left us on September 13 2019 while living in Oromocto. She loved Oromocto from her early days as a military wife.  Theresa is survived by her daughters; Pamela Walton (Bob) of Antigonish NS, Judith Gayton of Medicine Hat AB, Susan Gayton-Leroux (Dan) of Calgary AB, and Nansi Gayton (Sam) of Guelph ON, 5 grandchildren, one great grandchild as well as several nieces, nephews and cousins.

She was predeceased by all of her brothers and sisters.

Like the wives of many soldiers, (Capt. William (Bill) Gayton) Theresa was transferred around the country (indeed the world for that matter) but however chose Oromocto as her favourite place to live and has called it home now for many years. Early days would find her on the golf course, bowling alley, or curling rink doing the things she loved. When not playing sports herself, she would cheer on her friends or follow her favourite sports on TV.

Theresa loved a life of independence and could best be described as a woman confident in her own identity. A drummer, who marched to her own beat, unwilling to sacrifice her personal confidence to simply adhere to the tune being played by the rest of the band.

She will be dearly missed by many family and friends both in Oromocto and places far off but in particular, in the Oromocto area. Her nieces Nancy Sue (Gary) and Joanne (Gordon) were were frequent visitors and major sources of love and support.

Theresa, being the last surviving member of her immediate family is now reunited with her mother Alice Sampson and her sisters and brothers in heaven.

If you would like to remember Theresa in a way she would love you can simply do a good turn to someone today, leave a basket of food at the food bank or simply pause for a moment and say a prayer for someone in need.

There will be no visitation by request, a private family service will be held at a later date.

"If a man does not keep pace with his companions, perhaps it is because he hears a different drummer. Let him step to the music which he hears, however measured or far away."   Henry David Thoreau