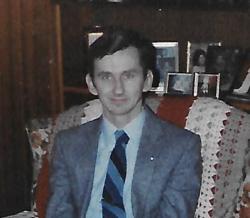 The passing of Andrew Christopher Currie of Fredericton, NB occurred on September 12, 2019, at the Dr. Everett Chalmers Hospital. Born on January 26, 1948, he was the son of the late Russell and Josephine Currie of Mactaquac, NB.

Most recently, Andy was probably best known for his abilities with a pool cue, as he attended several tournaments around the province. Over the years he was also active in bowling and he has a wall of trophies in both activities. He loved his time at his parent’s home in Mactaquac, hunting and fishing and hanging out with his friends and neighbors there. No matter where Andy went, his smile and friendly personality would cause people to be drawn to him.

The last surviving member of his immediate family, he is survived by his cousins in Fredericton and Mactaquac, as well as extended family and friends in Mactaquac.

Andy’s last six months were spent on the fourth floor of the Dr. Everett Chalmers Hospital where the staff showed such love and kindness to him for which the family is very grateful.

A graveside service will take place at the Mactaquac Cemetery on Monday, September 16, 2019 at 2pm with Pastor Hollis Clark officiating.

If so desired, the family has suggested that memorial donations may be made to the Mactaquac Baptist Church Cemetery Fund or The Salvation Army.

Bishops Funeral Home have been entrusted with the arrangements and online condolences and sharing of memories may be made at www.bishopsfuneralhome.com