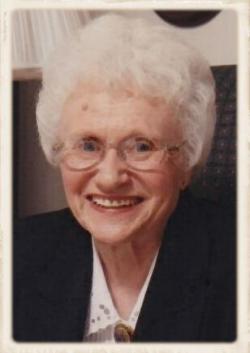 The death of Jean Nerene Belyea, wife of the late Malcolm Belyea who predeceased her in 1997, occurred at the Doctor Everett Chalmers Hospital on August 23, 2019. Born in Central Hainesville on May 23, 1925, Jean was the daughter of the late Ernest and Della (Billings) Wallace and is the last surviving member of her immediate family.

In addition to her husband and parents, she was predeceased by an infant sister, Ada and her sister Pearl Jones of Burtts Corner; brothers, Alvah Wallace of Hainesville, Wendall Wallace of Douglas, a brother-in-law, Hazen Jones of Burtts Corner; sisters-in-law, Beulah (Billings) Wallace, Mary (Billings) Wallace, Muriel (Robinson) Wallace of Douglas, Dora Wallace of Hainesville and Eleanor Belyea of Cambridge Narrows, Agnes Belyea; and a special niece, Nerene Hoben.

Visitation will be held on Monday, August 26 from 2pm -4pm and 6pm-8pm at Bishops Funeral Home, 540 Woodstock Road.  A funeral service will take place at the Brunswick Street Baptist Church on Tuesday August 27 at 2pm with Rev. Greg Geldart officiating. A private family interment in the Central Hainesville Cemetery will follow the service.  For those who wish, memorial donations may be made to the Central Hainesville Cemetery, the Brunswick Street Baptist Church Building Fund or a charity of the donor’s choice.

Online condolences and sharing of memories may be made at www.bishopsfuneralhome.com.