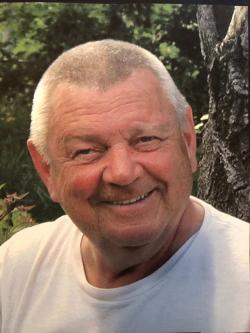 'It is with great sorrow that we announce the passing of David John McQuade (commonly known as Tab), at the Dr. Everett Chalmers Hospital on August 8th, 2019, after a brief battle with cancer. Tab was born in Perth Andover on July 19th, 1939 and is pre-deceased by his father Joseph, his mother Isabell (McDonald), his sister Helen McTavish, his brother Joseph as well as his son Stephen.

Tab is survived by his loving wife Carol (Bragdon) McQuade; his sons, Michael McQuade (Duranie) and Randy McQuade (Pierrette); stepson John Rickard (Melissa), his granddaughters; Rachel, Robbyn, Kristin and Alexis; grandsons, Stephen and Kyle; great-grandsons, Carter, Callen and Jerrod. He will be missed by many others close to him, including in-laws, nieces, nephews, close friends as well as his beloved pets Pixie and Alex.

Tab was an avid sports fan, a hockey player and a well-known coach who left a lasting impression on young lives in and out of the rink. During his hockey career he played for the Windsor Maple Leafs and a was member of the Fredericton Juvenile Hockey team in 1956. Some of his accomplishments included, coach of the Fredericton Capitals Senior A hockey team, a coach in Fredericton Youth Hockey (where he coached his sons), former president of Fredericton Youth Hockey Assoc (FYHA), the driving force behind the establishment of the Capital Invitational Hockey Tournament and was the founding president of Fredericton Sports Investment Inc. Tab was also an avid gardener and a great grill master.

The family welcomes you to attend a celebration of Tabs life which will be held on Tuesday August 13, 2019, beginning at 2pm until 4pm, at Bishops Funeral Home, 540 Woodstock Road, Fredericton NB. In lieu of flowers, the family requests that memorial donations be made to the Fredericton SPCA.

Online condolences and sharing of memories may be left at www.bishopsfuneralhome.com.