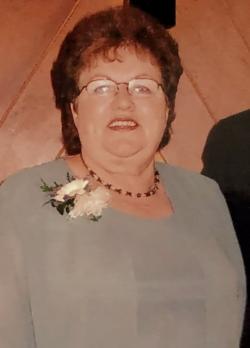 The family of Grace Mildred Brown of Fredericton are saddened to announce her passing at the Saint John Regional Hospital on July 20, 2019.  Grace was born on January 6th, 1945 to parents George Hood and Christine Whitlock.

Grace will be dearly missed by her husband Weyman Brown and her children, Art (Letha), Steven (Margie), Darren (Heather), Tami (Colin), and Kelly. Nine grandchildren and five great-grandchildren who were the light in her life will also mourn her passing. Grace is also survived by her sisters Glenna Barton (Eugene), Delma Rogers (Tom), Janet Howland, Roberta Joyce (Doug), sister-in-law, Wendy Hood as well as numerous nieces and nephews.

Grace was predeceased by her two brothers, Alton Hood and Melvin Hood as well as her brother-in-law, Richard Howland.

In addition to spending time with her grandchildren, Grace was involved with the Life Tabernacle Church in Fredericton where she enjoyed participating in bible study sessions.

The family has requested that there be no visitation or funeral services. Bishops Funeral Home, 540 Woodstock Road, have been entrusted with the arrangements and personal condolences may be made at www.bishopsfuneralhome.com. If so desired, memorial donations in Grace’s memory may be made to a charity of the donor’s choice.