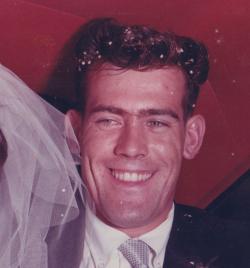 It is with broken hearts that we announce the peaceful passing of Edward (Ted) John, McFarlane on Saturday, July 20, at the Dr. Everett Chalmers Hospital. Born in Woodstock on December 17, 1946, he was the son of the late Harold and Dorothy (Willmott) McFarlane.

In addition to his parents, Edward is predeceased by his brother Leslie McFarlane, bother-in-law Dennis McKay and his Nephew Christopher Graham.

Edward was a Jack of all trades, being the family mechanic, electrician and plumber and he could fix just about anything. He loved to watch Nascar, , the tv shows "How it’s Made" and "American Pickers" as well as the History Channel.

The Family wish to express their gratitude to the doctors at the Dr. Everett Chalmers and Saint John Regional Hospitals and especially the nurses for their care and compassion shown to Edward and his wife.

For those who wish, donations in memory of Edward can be made to the Heart and Stroke Foundation. Online condolences may be placed at www.bishopsfuneralhome.com.