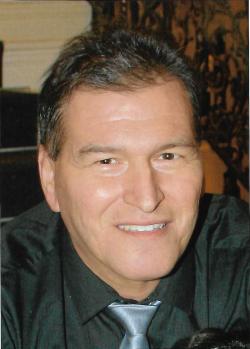 Surrounded by his loving family, Patrick "Trackie" Brooks of St. Mary’s First Nation passed away at home on July 5th, 2019 at the age of 51. Born in Fredericton, he was a son of the late Mark and Tina (Meuse) Brooks.

Trackie’s life revolved around spending time with his family, listening to the best music, joking around, and spreading his love. He was well known for his helpfulness, his humour, his hard work, and his dedication. Some of his best memories include dressing as Santa Claus for many years, and building the best Halloween costumes.

Resting at Bishop’s Funeral Home, 540 Woodstock Road, on Tuesday July 9th, 2019, from 2-4pm & 7-9pm. A Mass of Christian Burial will be held at St. Anthony’s Roman Catholic Church on Wednesday, July 10th, 2019 at 3PM with Father Curtis Sappier and Father Martin Arputham officiating. Interment will be held in the church cemetery.

In lieu of flowers, remembrances may be made to the Canadian Cancer Society or to a charity of the donor’s choice.

Condolences can be made to bishopsfuneralhome.com
Click here to View Condolences
Service Date
Wednesday, July 10, 2019