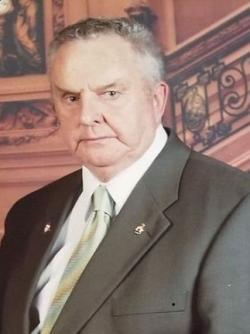 Harry Sheldon Jones passed away suddenly on June 16th. He was born to the late Lillian (Delong) Jones and Willis Jones on April 6, 1938.  He was a member of Grace Memorial Baptist Church and the Royal Canadian Legion No. 4. He served in the Canadian military for 10 years in Germany, Kingston, and Gagetown. He drove bus for District 18 and retired from the Fredericton Fire Department in 2003. He was a member of the Fredericton Fire Fighters Alumni and enjoyed their monthly breakfasts.

He is survived by his wife Alice (Justason) Jones whom he was married to for 53 years, his son Brian S. Jones (Raena) and his daughter Lori Jones Clark (Brian). He had four cherished grandchildren: Mackenzie Clark, Alex Clark, Forest Jones, and River Jones. He is fondly remembered by several nieces and nephews.

He was the last surviving member of his family and was predeceased by his twin brother Lynwood and sisters Jeannine Kimbal, Evelyn Stevenson and Gwen Jones.

A funeral service will take place at Grace Memorial Baptist Church Wednesday, June 19 at 2:00 by Rev. Dr. Peter Lohnes. A reception will follow the service at the church.

The family wishes to thank the staff of Veterans Health for their kind and loving care. In lieu of flowers, donations may be made to Grace Memorial Baptist Church or a charity of the donor's choice.

Bishops Funeral Home (506-458-1885), 540 Woodstock Road, Fredericton, NB, have been entrusted with the arrangements. Online condolences and sharing of memories may be sent though www.bishopsfuneralhome.com .