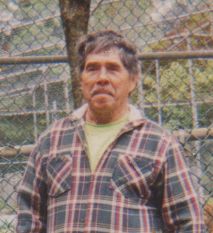 The passing of Bert Francis Sacobie of St. Mary’s First Nation occurred on Sunday, June 16th, 2019 at the Dr. Everett Chalmers Regional Hospital. A son of the late Frank and Bertha (Nash) Sacobie, he was 68.

A member of St. Mary’s First Nation and Catholic by faith, Bert was a jack of all trades throughout his life.

Besides his parents, Bert was predeceased by his first wife Darlene Sacobie, two brothers Warren and Mike, two sisters Glenna and Molly as well as one special nephew Kenny "Munster".

Resting at 408 Kingsclear Ave, Kingsclear First Nation on Tuesday afternoon and Wednesday all day. A funeral service will be held on Thursday June 20th, 2019 at 11 AM from St. Anthony’s Roman Catholic Church with Father Martin Arputham officiating. Interment to follow in the church cemetery.

For those who wish, memorial contributions to the NB Heart and Stroke Foundation have been suggested by the family.